China can no longer rely on real estate for growth. It's now turning to railways and more debt

In the past, the Chinese government looked to real estate to stimulate growth.

But now, Beijing is trying to stop the risks of high housing prices from spilling over into the rest of the economy.

That leaves authorities with the option of infrastructure spending, which will add even more debt to an already leveraged system.

Chinese authorities face an ever-growing list of challenges — be it an ongoing trade fight with the U.S. or headwinds in domestic demand — and it appears they don't have many tools left to spur the economy amid a slowdown.

The real estate market in China has traditionally played a major role in its economic development, household wealth and public sentiment. Real estate has been used by Beijing to stimulate growth during previous downturns, including one just three years ago.

But along with a Chinese penchant for investing in houses, persistent expectations of government support sent prices and the household debt burden soaring.

That's created a delicate situation, one which analysts expect Beijing will not touch this time around, except to keep prices steady. 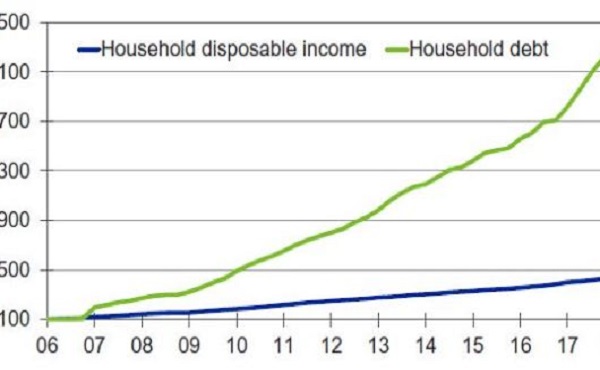 Some "simple math shows that continuously building new homes to stimulate investments and meanwhile create the false impression of wealth effect coming with home price appreciation is about to hit the wall," she said in a January report. "Chinese policy makers are fully aware and highly alert not to send the wrong signal to the home buyers that home prices will continue to hike."

As Beijing tries to shift its economy to one that's driven by consumption, the worry is that consumers will not have the means, or the enthusiasm, to spend. Already, retail sales growth has slowed significantly amid uncertainty about U.S.-China trade tensions and the impact on economic growth.

"This round of economic decline is due, to a large degree, to a downturn in individual and private sector confidence."

Economists at Moody's Analytics pointed out in December that Chinese disposable income has grown at an average annual rate of 10 percent for the last six years, while household debt — of which the majority is tied to housing — has grown at an average rate of 20 percent a year. In the past year, the average rate of household debt growth climbed to 26 percent, the report said.

It's unlikely that the housing market will lead China out of the latest economic slump. In the last few years, government intervention has cooled the market, and real estate's contribution to growth has fallen slightly to about a third or a quarter, according to Dan Wang, analyst at the Economist Intelligence Unit.

In fact, several China watchers have said the property market poses the greatest risks for China in the year ahead.

On Tuesday, Lynda Zhou, Fidelity International's chief investment officer of equities in China, said an unexpected sharp drop in housing prices would be a "black swan" event. A black swan event is an unforeseen occurrence that usually has dire consequences, which Chinese President Xi Jinping warned of earlier this week when he was talking about challenges to China's economy.

China's rapid ascent to becoming the world's second largest economy has brought with it a slew of problems.

The Communist Party-controlled government has so far managed to keep a handle on growth. But it's an ongoing challenge that faces repeated tests. To prevent a sharp economic slowdown this time, analysts said Beijing has only one primary option for spending: infrastructure.

"This round of economic decline is due, to a large degree, to a downturn in individual and private sector confidence," Qian Wang, managing director and chief economist, Asia-Pacific, at Vanguard Investment Strategy Group, said in Mandarin during a press event in Shanghai earlier this month. "In this situation, we are concerned that stimulative economic policy may be slowly losing its effectiveness, and may not work as quickly."

Wang expects the government's announcements on tax and fee cuts to have a positive effect in the long term, but in the short term, authorities will need to stimulate through infrastructure spending.

Here, the Chinese government has moved swiftly after pausing many plans for railway development because of concerns about debt buildup. Some have criticized Beijing's crackdown on leverage in the last two years as overly harsh, contributing to the slowest pace of gross domestic product growth in 28 years in 2018.

The National Development and Reform Commission suspended approvals of urban transit projects in August 2017. But in the second half of last year — primarily in December — the Commission gave seven major Chinese cities the green light for such projects, Nomura's chief China economist Ting Lu and his team pointed out in a Jan. 18 report. As of publication, total investments into such projects reached 714.2 billion yuan ($105 billion), the report noted.

"The acceleration in the pace of these project approvals suggests that Beijing has become more concerned with the economic slowdown and is keen to pick up urban transit investment (a key portion of infrastructure investment) to increase demand and stabilise economic growth," Lu said in the report.

The hope is that developing projects such as high-speed rail will bring temporary jobs, economic growth and investment to lesser known areas. Amid concerns about high-debt levels, analysts said China is trying some alternative financing methods such as private partnerships and project-based debt issuance.

Infrastructure spending can also come in the form of investment in technologies such as 5G and the internet, Vanguard's Wang said.

With its "Made in China 2025" plan, Beijing aims to turn the country into a global technology leader. In a Jan. 22 report, the Economist Intelligence Unit found that cities which have aligned themselves with the central policy generally have better growth prospects.

However, it's unclear how quickly and to what extent increased spending on such infrastructure projects will help economic growth. China has already built an extensive high-speed railway network, especially in the most prosperous regions. And in another major issue for authorities, the private sector which creates most new jobs is struggling in a financing and operating environment that still favors state-owned enterprises.

Previous：Climate change will crush real estate values for investors who don't prepare, new report says Next：It looks like this year could be a buyer's market for real estate as higher rates weigh on prices