A new Harvard study claims climate change is altering home values both on the coast and inland, coining the term, "climate gentrification."

"Higher elevation properties are essentially worth more now, and increasingly will be worth more in the future," according to Harvard's Jesse Keenan.

Universities, climate research groups and the National Oceanic and Atmospheric Administration have made dire predictions of sea-level rise in Miami.

A modern glass home sits on the edge of the water in Miami Beach. The ground-level master suite has a soaking tub that looks out to the ocean, and the bedroom's glass doors allow the owner to roll out of the sheets and onto the yacht. It is listed for sale at $25 million.

Another Miami home sits on a garbage-strewn street in Little Haiti, about five miles inland. Its owner can walk out the front door and see a dead chicken in the street. It is listed for sale at $559,000, but some experts claim it is a better investment than $25 million mansion.

The mansion, while highly desirable and exquisitely appointed, is paradise at a price, because rising tides and increasingly extreme storms may already be lowering its value. On the other hand, the home in Little Haiti, which sits on high ground with little risk of flooding, is appreciating at a fast clip. It has nearly doubled in value in just the past two years, according to Zillow.

"What we see here is a theory of climate gentrification that suggests that in Miami, higher elevation land will be worth more," said Harvard University's Jesse Keenan, who co-authored the first peer-reviewed study offering evidence of the existence of a climate change signal in the real estate market.

The study tracked the values of more than 100,000 single-family homes across Miami going back 45 years.

"What we found is that the higher elevation properties are essentially worth more now, and increasingly will be worth more in the future," Keenan said. "Populations, including speculative real estate investment will densify in these high elevation areas."

Keenan claims home values on Miami's coast are already worth 10 percent less now than they would be if climate change didn't exist.

Universities, climate research groups and the National Oceanic and Atmospheric Administration have made dire predictions about sea-level rise in Miami — the ocean overtaking vast swaths of real estate over the coming decades. So-called "nuisance" flooding, when king tides come in on sunny days, is already common in some neighborhoods.

That, argues Keenan, is why wealthier investors are now displacing low-income residents in high-elevation neighborhoods, like Little Haiti.

Fabiola Fleuranvil is a real estate investor and community activist in the area. She is trying to educate local residents about the rising value of their properties.

"All the community sees is just new people, newcomers coming into the community, buying up properties, raising their property values and property taxes, pricing them out," Fleuranvil said while walking down the street with the $599,000 listing. "You're in a pocket where there could be $80,000 to $100,000 properties, and here's one here, an outlier, that's about half a million dollars."

The home, which was purchased out of foreclosure by an investor, was fully renovated and will likely sell to another investor.

"If you have a smart investor and developer, and he's already seeing what's happening with one smart property, and he acquires the rest of the properties next to it, within a quick year or two, you'll see this community change. And it's happened pretty rapidly," Fleuranvil said.

It is already apparent on the busy retail street by the home. An entire row of formerly Haitian-owned businesses are empty and being gutted. On one side of the street, a sleek and trendy high-end coffee company has already moved in, in stark contrast to the ethnic stores.

"You have long-time commercial tenants who have been here for 10, 15, 20 years, and new investors and developers no longer want their rent checks. Why? Because now, they're redeveloping it," said Fleuranvil.

Part of what is behind Little Haiti's gentrification, however, is just the growing trend toward urbanism. It has nothing to do with water. Millennials in cities across the nation are migrating to urban centers, choosing less expensive and more ethnic neighborhoods to inhabit. Investors, however, while following demand, are increasingly attuned to the threat of water and are developing projects in higher-elevation neighborhoods at a faster pace.

"I would say water, for a firm like ours, is becoming a decision maker, as it relates to strategies for investment. I definitely do," said Martin.

Martin said he "embraces the analysis" in Keenan's study but believes many factors go into the financial decision of buying and selling real estate beyond just water risk and elevation. He added that the study does not bring in flood mitigation enough, specifically how waterfront towers will actually help protect Miami from future flood disasters. 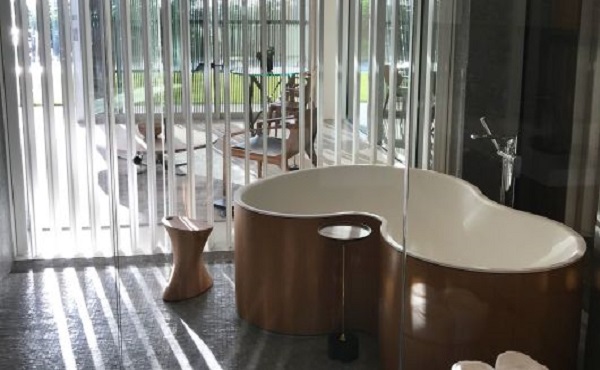 The city of Miami is already investing nearly $200 million into resilience, installing pump stations and upgrading its infrastructure. Miami Beach is on track to spend twice that, raising sidewalks and seawalls. The money is coming from new bonds – voters raising their own property taxes to protect their property.

"You can argue with climate gentrification and whether it's a good theory or not, but you can't argue with the science and the economics behind that proposition that this is a signal. We found it. It's already happening," argued Keenan.

Martin wouldn't say the project he's developing on higher ground is specifically climate gentrification, but he said: "This would be an example of a solution to adapt and mitigate from flooding. We need to move density into areas that are less vulnerable."

When asked whether he was hedging his bets by building on the water as well as inland, he replied, "I think there are opportunities in both areas."

Because while real estate values are rising on higher ground, demand is still high on the coast. Real estate agent Danny Hertzberg, the listing agent on the $25 million property, said he doesn't fully buy the climate gentrification thesis, although he admitted his clients are more wary of rising water.

"The main change I see is that people are a lot more focused on new construction, modern homes, because the newer homes, with our new code, they're at a higher elevation. So that's been a change," Hertzberg said. "I don't think people are going to give up the beauty of living on the water, having their boat out front. I mean, people come here from all over the world to live on the water."

Another recent study from the University of Colorado and University of Pennsylvania found that homes exposed to sea level rise nationwide sell for approximately 7 percent less than unexposed properties that are the same distance from the beach.

The discount, it claims, has grown over time, driven by sophisticated buyers and investors worried about global warming.

Correction: This story was revised to delete two incorrect references to the name of the gentrifying neighborhood. It's Little Haiti.