Mitt Romney also slammed Biden, saying that his comments “will not age well.” 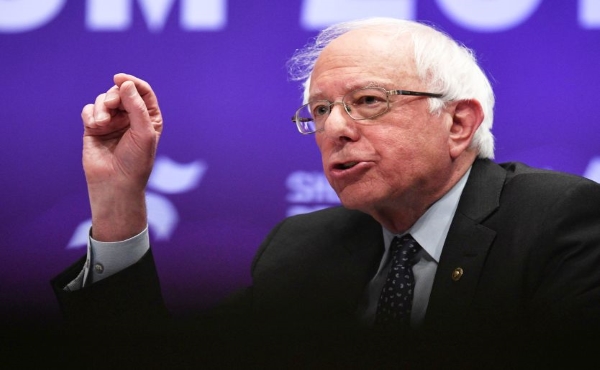 Sen. Bernie Sanders hopes to set himself apart from his most formidable 2020 rival on a signature issue: trade.

Former Vice President Joe Biden, who has led Sanders in early Democratic presidential primary polling since entering the race a week ago, raised eyebrows Wednesday by downplaying the economic threat posed by China. At a campaign stop in Iowa, Biden said: “China is going to eat our lunch? Come on, man.”

Biden has made similar comments in the past. But in a political environment where both major parties have knocked the downsides of free trade and decried the growing influence of the world’s second-largest economy, his remarks stand out.

Sanders, who has aimed to set himself apart from Biden by highlighting his opposition to the North American Free Trade Agreement and Trans-Pacific Partnership deals, took a veiled shot at the former vice president Wednesday night. The Vermont independent said that since the 2000 passage of a bill extending normal trade status to China, which he opposed as a House member, the U.S. has lost more than 3 million manufacturing jobs. Biden voted for the measure as a senator.

“It’s wrong to pretend that China isn’t one of our major economic competitors,” the Sanders campaign wrote in a tweet. “When we are in the White House we will win that competition by fixing our trade policies.”

Criticism of Biden’s comment came from the Republican side, too. Sen. Mitt Romney of Utah responded to his remarks by saying, “This will not age well.”

The Biden campaign did not immediately respond to a request to comment on Sanders’ apparent criticism of the former vice president.

President Donald Trump won traditional manufacturing states such as Pennsylvania, Michigan and Wisconsin in 2016 in part by pledging to crack down on what he called Chinese trade abuses. His administration has levied tariffs on Chinese goods and pushed for a new trade agreement with Beijing, which it could announce in the coming weeks.

The president has found kindred spirits on the Democratic side. Primary candidates such as Sanders and Sen. Elizabeth Warren, D-Mass., have argued that free trade agreements have hurt American workers by encouraging companies to hire overseas.

Biden — who has pegged his presidential hopes in part on winning his home state of Pennsylvania — will have to defend his trade policy history as he tries to garner support in Midwestern states. As a senator, he voted to ratify NAFTA. As vice president, he also pushed for the TPP agreement — which Trump, Sanders and several Democratic senators running for president opposed.

On Monday, Sanders drew a distinction between himself and the former vice president on trade.

While Biden did not respond to Sanders’ specific criticism, he defended his policy history Tuesday.